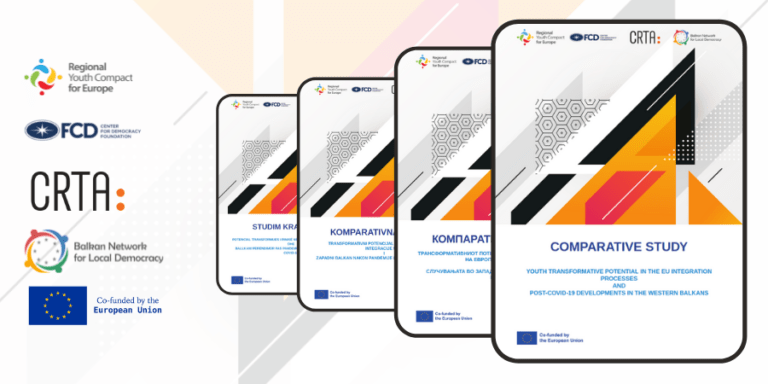 I would like for young people in the Western Balkans to be more connected, to exchange experiences and knowledge more. That is very important because young people in the Western Balkans, unfortunately, do not know enough about each other. The tragic’90s took us apart. We have a lot of common concerns and problems that we can solve together or at least help make the positive change happen.

A respondent from Serbia

There is so much going on in the Western Balkans, and we wish that many things have never happened. History, beauty, struggles, (competing) identities, everlasting narratives, unresolved issues, and deep pulsing traumas – all bundled in one region. History is now, it is happening in front of us, we are reliving it and making it as we speak. We are trying to understand our present, but we are living in the past. We are constantly looking behind us, we cannot get rid of our tails, dragging behind us and blocking the doors of the past we want to shut. We cannot finish things up, close that door and move on. Move on where? Our path, joint, seems to be set – we are moving towards Europe, although we are in Europe. Competition between the two Europes in our mindset is yet another paradox. I was flying once from Belgrade (Serbia) to Brussels (Belgium) via Zurich (Switzerland). Why are you coming to Europe? The customs officer at the Zurich Airport asked me. I have never left it?! I said, a bit puzzled. One of the respondents noted when comparing the level of effort an average young person in Albania has to invest in order to accomplish even the smallest thing with the level of effort of an average young man in the EU: There is that English word ”struggling” which captures all the feelings of Albanian youth; youth which is limited with the fact that it is in Europe, but out of Europe.

Six Western Balkans (WB6) societies– Albania, Bosnia and Herzegovina, Kosovo*, Montenegro, North Macedonia and Serbia are on their way to the European Union. Democratization of the Western Balkans is the path and a goal by itself. It has been a long process, and it is going to last for quite some time. Eventually, once the struggle for democracy sees its outcomes, our region will be much different than it is now. It will be led by some other people, more likely better than us – today’s youth. If you agree with me on the last sentence, then why not try giving up at least some of that power now, so that the youth of today can start leading before tomorrow comes!

This research study tries to identify what are the transformational potentials of WB6 youth in the EU integration processes and where do these potentials reside, particularly in the light of the COVID-19 crisis. More precisely, the study wants to investigate and analyze the key drivers and motivation for youth participation in decision-making processes, and the relationship between that motivation and the perspectives in relation to the EU and its core values. The study also attempts to give indications of what makes the youth adhere to those values in 2020, having in mind political and social turbulent dynamics in the region, as well as what motivates them to move forward and stay actively involved in their societies’ and the region’s future. The study particularly examines how COVID-19 crisis affects their motivation and perceptions, as well as how youth perceives the effects of the pandemic on their further involvement in the policy designs and the EU integration processes. It analyses what tools and approaches, when it comes to youth participation, work best, and which ones are expected to be more efficient and fruitful in the future.

This research study was prepared within a wider “Regional Youth Compact for Europe” project, supported by the European Union, which aims to empower CSOs, particularly youth organizations in the WB and Turkey for a more effective participation in policy – making and monitoring process of the EU integrations. (…)

“Regional Youth Compact for Europe” is a 3-year project implemented by the Center for Democracy Foundation and 13 other partners.

The project was financially supported by the European Union and co-financed by USAID and the Balkan Trust for Democracy.

RECOMMENDATIONS resulting from the Conference European Union and the Western Balkans: Towards Renewed Trust