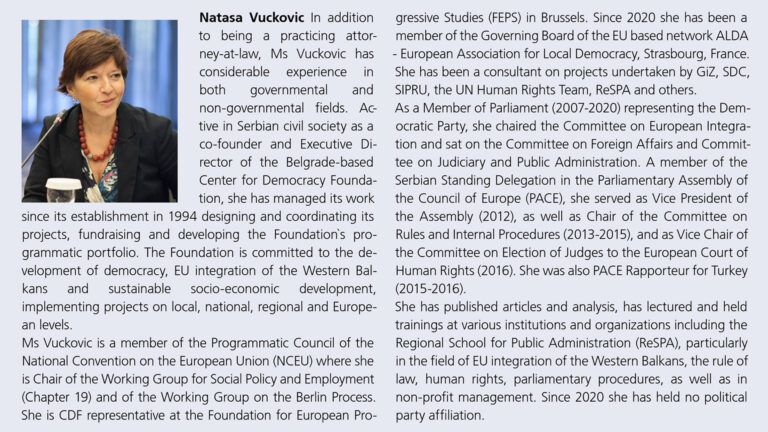 Natasa Vuckovic: New Reality and the Election Campaign in Serbia

FES Publication Towards a Revival of Democracy: Perspectives on the Elections in Serbia 2022

If the deadline for this brief paper on the importance of the forthcoming elections for civil society were just ten days earlier, prior to Russia’s invasion of Ukraine, this paper would have been different. The most recent events in the east of our continent have created a new reality that will define long term political, economic and social developments both in Europe and Serbia. The war in Europe will shape new priorities and new narratives and will change the focus and behaviour of many actors in the European Union, in the institutions, political parties and businesses alike. This will also have an direct impact on the election campaign in Serbia – it seems imminent that the position of Serbia and the standpoints of the major political parties about this conflict will push the contents of the programmes offered by the political parties to the second plan in media. In a matter of only a few days, the focus of the public and citizens of Serbia has shifted from the launch of the election campaign to the international stage.

The local elections in the City of Belgrade have instilled a great hope that, given the major discontent of Belgraders, the City Assembly elections will be a major battle that the opposition stands a chance of winning. This would open up the possibility for a certain ‘division’ of power between the central and local levels. In case of the opposition victory in Belgrade, the central authorities, where lower prospects of major change are forecast, would be then forced to establish institutional dialogue, coordination and cooperation with new city authorities. This could partly relax the firm and irreconcilably opposed positions between the biggest party and the opposition, and would also mitigate deep polarization which is so harmful for societal development. This would add wind in the opposition’s sails and serve as a huge basis for its further development and strengthening.

Finally, what remains are the presidential elections which many deem to be of essential importance as presidential candidates predominantly colour their parties’ electoral lists’ campaigns and impact the major campaign tone. Since there is no candidate who would be a priori recognised as Aleksandar Vucic’s rival with chances to win, it appears that the opposition would consider as a success if Vucic is thwarted from winning the elections in the first round since. If that happens, from that moment onwards, anything could change.

The election results will largely depend on the level of compliance with electoral procedures and on how fair and democratic the elections are going to be. The opposition’s monitoring of the elections will have a crucial role in this. The credibility of election observers and mutual cooperation among the parties in organising the monitoring and control of the entire electoral process are also important for both creating citizens’ trust in the opposition and for reducing voters’ fears, especially in the smaller communities.

The opposition, including the parties on the far right of the political spectrum, have selected several main topics for their respective election campaigns – the fight against corruption, environmental protection with a predominant narrative against Rio Tinto’s investments, wage increase, and support to farmers. Interestingly enough, labour rights is another topic that features on the programme agendas of several opposition parties. The EU accession process, however, is not at the forefront.

It remains to be seen how the war in Ukraine will influence that these topics are in the focus of voters’ attention and whether the ware would shift their previous, pre-war priorities to other topics. The question raised here is how will Serbia keep its EU integration agenda and defend its European path in a situation where this path may be jeopardized by amid requests to prove just how sincere its European commitment really is. It seems that a few weeks ahead of the elections, the opposition needs to become engaged in this domain as well, i.e. speak about the necessity of Serbia’s European path, request debates on current foreign policy issues and take part in these debates and offer solutions to these issues, as all of these topics will determine the country’s future.

A major part of civil society is traditionally engaged in the elections in Serbia. First and foremost, civil society organisations have played a major role in advocating dialogue on electoral conditions between the regime and opposition. Monitoring of the election process is a regular activity of civic associations. The fight for more democracy is also a fight for better working environment for civil society and for citizens’ involvement in the decision-making processes. This is why coordination with political parties that share the same goal and are participants in the political process is necessary, while the civil society shall preserve its independence.

Natasa Vuckovic In addition to being a practicing attorney-at-law, Ms Vuckovic has considerable experience in both governmental and non-governmental fields. Active in Serbian civil society as a co-founder and Executive Director of the Belgrade-based Center for Democracy Foundation, she has managed its work since its establishment in 1994 designing and coordinating its projects, fundraising and developing the Foundation`s programmatic portfolio. The Foundation is committed to the development of democracy, EU integration of the Western Balkans and sustainable socio-economic development, implementing projects on local, national, regional and European levels.

Ms Vuckovic is a member of the Programmatic Council of the National Convention on the European Union (NCEU) where she is Chair of the Working Group for Social Policy and Employment (Chapter 19) and of the Working Group on the Berlin Process. She is CDF representative at the Foundation for European Progressive Studies (FEPS) in Brussels. Since 2020 she has been a member of the Governing Board of the EU based network ALDA – European Association for Local Democracy, Strasbourg, France. She has been a consultant on projects undertaken by GiZ, SDC, SIPRU, the UN Human Rights Team, ReSPA and others.

She has published articles and analysis, has lectured and held trainings at various institutions and organizations including the Regional School for Public Administration (ReSPA), particularly in the field of EU integration of the Western Balkans, the rule of law, human rights, parliamentary procedures, as well as in non-profit management. Since 2020 she has held no political party affiliation.

FES Publication Towards a Revival of Democracy: Perspectives on the Elections in Serbia 2022 (PDF)