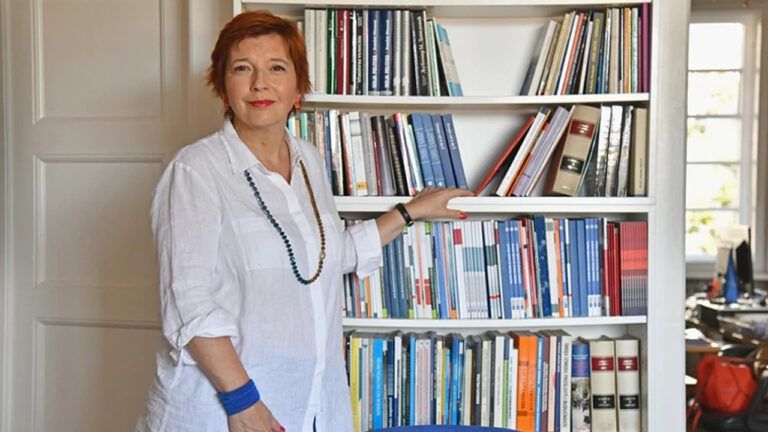 Nataša Vučković for Blic: America’s participation in the dialogue is critical

Interview: Secretary General of the CDF for Blic Weekly

It seems to me that America’s participation and support of the dialogue is critical. I think that the resolution of open issues, including Kosovo, is viewed as a guarantee for stability and reducing the impact of other international actors of the region, said the Secretary General of the CDF, Nataša Vučković, in an interview for Blic nedelje [in English: Blic Weekly]​.

Highlights over the past week include difficult negotiations between Belgrade and Priština. These were meant to resolve the crisis caused by the decision of Kosovo’s Prime Minister, Aljbin Kurti, to introduce reciprocity for the personal documents of Serbs living in Kosovo and license plates issued by Serbia.

Even the intervention of the special envoy of the State Department, Gabriel Escobar, and the EU emissary, Miroslav Lajčak, failed to help the sides reach an agreement. It was precisely the events surrounding the discussion held in Brussels which were the topic of the interview with Nataša Vučković. In addition to these events, we also touched on the formation of the Government and the participation of the pro-European opposition in the Serbian Parliament.

Dialogue between Belgrade and Priština is at a dead-end. This time the crisis was caused by the introduced reciprocity regarding license plates and personal documents. What do you see as the solution?

– Keeping the peace and stability are of critical importance because if they were to be compromised, it is uncertain as to what direction things could potentially progress, particularly under the current international crisis, that is, the war being waged on European soil. Other important issues are the freedom of movement and rights of individuals living in the north of Kosovo to declare themselves as Serbs. A promising statement was made by Mr Escobar, where he said he is certain that Serbs living in Kosovo will not experience any changes in their lives from 1 September. A compromise must be sought, this is for certain, and it means that both sides will need to give up something. The third issue, which the Serbian side continues to insist upon, with reason, is the issue of the Community of Serb Municipalities. And within this context, European and American negotiators and interlocuters seem to understand that all of the elements of the agreements made thus far need to be implemented, including the CSM (Community o Serb Municipalities). There is no legitimate reason for Kosovo to deny the formation of the CSM.

Over the past weeks, the US has been more obviously involved in talks. Is this one additional form of pressure being applied on both sides, and; is it in Serbia’s interest to have the US more actively involved, given that the US recognises Kosovo as an independent state?

– It seems to me that America’s participation and support of the dialogue is critical. In particular, within the context of the Ukraine war, which imposes a clear geopolitical classification of Western Balkan countries. The US steers geopolitical processes in the Western Balkans as well. I think that the resolution of open issues, including Kosovo, is viewed as a guarantee for stability and reducing the impact of other international actors of the region. The United States could apply pressure, both in order to maintain peace, but also because they could significantly contribute to achieving a fair solution for both sides. Of course, we mustn’t forget KFOR’s role in preventing conflict and sustaining the peace.

German Chancellor, Olaf Scholz announced a meeting with Vučić and Kurti to be held in Berlin in the autumn. Does all this mean that the form of dialogue that we’re familiar with is now a moot point?

– It is understandable that the laser focus of the EU and Member States is currently on the aftermath of the war in Ukraine. And, as we witnessed at the meeting of the European Council in June, they failed to send a positive message to the Western Balkans that the enlargement process is still alive and well and that EU membership is an achievable goal, a message that we were expecting to receive. This was rectified in relation to North Macedonia and Albania later on. All this has been a bitter pill to swallow and has had a significant impact on the population’s disposition toward the European Union and the European integration process, increasing mistrust in the process and the EU’s intentions. This is not good, as there is no other alternative to the EU, neither for Serbia, nor for Kosovo. Which is why increased EU presence is of key significance. It’s important that both sides, the EU and its Member States on the one side, and all those belonging to the Western Balkans, on the other, demonstrate their willingness to become partners and collaborate together to resolve issues, which have consequences for all should they remain as they are. This is how I see the announced involvement of Chancellor Scholz. I would wait for the results to come in concerning the process currently underway. Then, we’ll see whether the form of dialogue is to change in future or not.

Do you expect even more pressure to be applied to Serbia in the coming period to introduce sanctions against Russia, along with pressure to resolve the Kosovo issue?

– I think that applying pressure on Serbia to introduce sanctions and to resolve the Kosovo issue at the same time is not, as you said, a good road to go down, that it would be too much for Serbia to bite off and chew at the same time. For both, the support of the people is required. Or, at least, for there to be little resistance, which is difficult to achieve at once, rather, preparation is needed. I believe that in the coming period, it will be insisted upon for an agreement to be reached between Belgrade and Priština, that is, implementation of agreements that have already been reached.

In that sense, Serbia is currently balancing both sides, do you think this is a good solution?

– Given the energy situation in Serbia, it seems to me that Serbia doesn’t have much in the way of manoeuvrability. It is of key importance that the country joins the EU’s Common Foreign and Security Policy but, on the other hand, it is not possible to diversify energy sources in the short term. We see that much bigger countries in the EU are experiencing difficulty in finding alternative sources of energy and financially sustainable solutions. Given that our foreign and domestic policies greatly depend on the Kosovo issue, Russia’s position in the UN is of vital importance to us. This further exacerbates Serbia’s position. However, it is important for Serbia to take a clear stance and to publicly condemn Russia’s attack on Ukraine, the devastation caused to human life, cities/towns and Ukraine’s infrastructure, as was the case during the vote to suspend Russia from the UN Human Rights Council in April of this year. At the same time, when we have this situation where there is little talk of stopping the war, Serbia needs to advocate for peace and diplomatic resolution of the Ukraine crisis. Among the many reasons for Serbia to speak out, the simplest is the fact that two nations of peoples close to us are at war.

The formation of the government awaits; what will its composition tell us?

– I’m not expecting any major changes in the ranks of Progressive ministers. There are some indications suggesting that the government will be somewhat inclusive and more open to various political and social groups, including minorities. It will be interesting to see what new roles SNS coalition partners will play in the government. Those most important areas of government – foreign and domestic affairs, defence and European integration – will indicate the direction in which Serbia will turn in the coming period. To me, it is important to know who will be the ministers of justice, education, health, culture and labour and social policy as this will tell us whether or not the government has the capacity to resolve Serbia’s urgent societal issues and to establish a value system, to instil judicial safety and protection of human rights. The Ministry of Justice is tasked with applying the amendments to the Constitution through a new set of judiciary laws – which is crucial to establishing the independence of the courts, the separation of powers and rule of law. Without a doubt, the Ministry of Energy will also play a key role. Nevertheless, as we know from the example taken from the last area I mentioned, in addition to the ministries, it is important to know who will be in charge of running the public enterprises, institutions, etc. However, if the government fails to make a wholehearted effort, together with the president and the Assembly, to contribute to creating a better political climate and nurture democratic dialogue, to openly apply European values in everyday speech and behaviour, both the nation and its people will suffer the consequences.

The pro-European opposition returned to the Assembly after the April elections, what role do you expect it to play there?

– It’s great that the opposition has returned to the Assembly. They realised that nothing good ever comes from a boycott policy; not to society, not to the state, and not to the opposition itself. I can’t say for certain but we will eventually find out who the real pro-European opposition is. I expect this opposition to be the bearers of the European narrative, to promote and advocate for European values and standards, to control whether the Government has truly implemented these values and standards in the laws or is just faking it. It needs to ensure that the citizenry has a better understanding of the European Union and our path toward membership. By actively participating in the Assembly, they will be able to increase the degree to which the population is informed in this reality where the media is being controlled. I’m expecting proactive European policy, where the policy project is clearly visible and can be credibly defended by people who are convincing. Such a policy project should convincingly pinpoint the exact way in which it intends to fight the ‘captured state’ and corruption. As well as how it will build a lawful state and improve democratic procedures, all while persuading the people that if the opposition were to come into power, they have the strength to really pull this all off. To put it bluntly, I expect a clear policy and a convincing presentation.