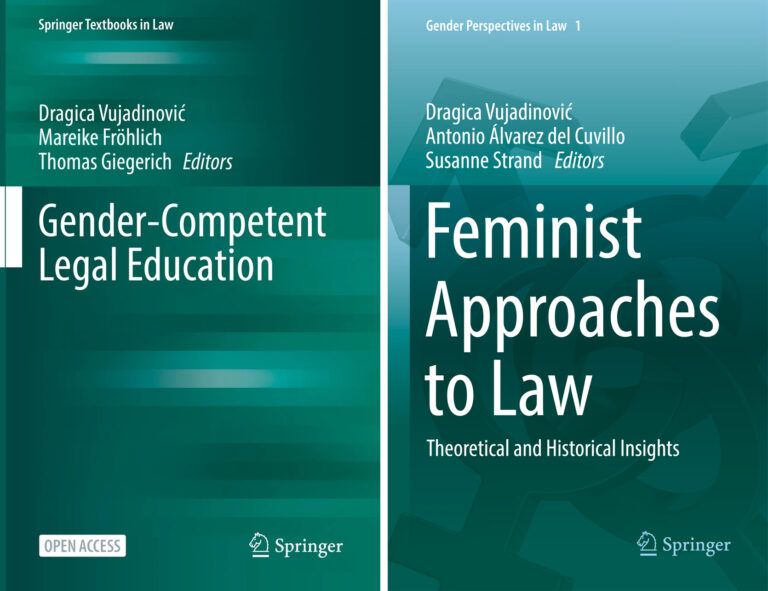 University of Belgrade Faculty of Law is glad to inform you that the New Quality in Education for Gender Equality – Strategic Partnership for the Development of Master’s Study Program LAW AND GENDER, LAWGEM has led to the development and publication of books of great importance not only for teaching staff, but also for legal practitioners, students, as well as anyone else interested in acquiring a better understanding of contemporary gender competent legal questions.

This primarily relates to the textbook Dragica Vujadinovic, Mareike Fröhlich, Thomas Giegerich (eds.), Gender-Competent Legal Education. You can access the textbook by clicking this link: https://link.springer.com/book/10.1007/978-3-031-14360-1?page=1#toc

The textbook presents a result of joint work of authors from five European universities – Libera Universita Maria SS. Assunta Di Roma, Department of Law – LUMSA University (Italy), Universidad de Cadiz (Spain), Orebro University, School of Law, Psychology and Social Work (Sweden), Saarlandes, Faculty of Law Europa-Institut (Germany), and Belgrade University (Serbia) which also acted as coordinator. It is safe to say that this textbook presents an important step towards achieving a better understanding of law in a systemic and gender-competent way. One of the main intellectual outputs of the LAWGEM project is the publication of this textbook, which reflects all relevant fields of legal education of the curriculum for the master’s study program “Law and Gender”. Academic scholars from universities across five different countries were involved in writing this book. Such successful teamwork gives the text a specific quality and is an unprecedented academic phenomenon. Working at different universities (primarily at faculties of law), researchers accepted to investigate and study feminist critical legal and political literature, reconsidering from a gender perspective their various fields of academic research and teaching. All chapters of the book present an in-depth attempt to deconstruct and reconstruct specific relevant fields of legal education from a gender perspective. To that end the chapters articulate scientific analyses of all legal fields of knowledge related to the positive civil, public, international, criminal law, European Union Law, as well as to the legal-economic, legal-historical, theoretical-legal fields of legal education. Sometimes the notion of “woman” still features as the paradigmatic subject, rather than the notion of “gender;” other times, the notion of “gender” is considered mostly in a binary way and primarily in a heteronormative sense. This is problematic when faced with the diversity of lives women lead and considering the changing notions of “man” and masculinity, as well as that of “gender,” and indeed, when witnessing the impact changes to family law, inheritance law, criminal law, tax law etc., have had on the heteronormative order. Some authors and chapters have kept the binary gender construction, others have moved towards conceiving issues surrounding the identities of a third gender and transgender persons. These differences in levels of understandings reflect the different stages and states of affairs in knowledge and mindsets of the authors involved, thus also generally reflecting existing differences in that regard among the contemporary intellectual, political, and legal public. It could be said that the scope of these texts surpasses their inner quality; indeed, they do because they seek to stimulate and provoke further academic attempts at ever better and richer results of systemic gender-competent legal knowledge. Last but not least it is important to emphasize that this textbook encompasses 18 different chapters dealing with specific disciplines of law and similar multidisciplinary fields. This textbook will certainly stimulate its users, but also the broader legal public to continue reconsidering the law and specific fields of interest within it from a gender perspective.

Moreover, it is our great pleasure to inform you about the book series Gender Perspectives in Law, 2022 eds. D. Vujadinović, I. Krstić. The book series represents the added value to the project Erasmus+ Strategic Partnership in Higher Education, called “New Quality in Education for Gender Equality – Strategic Partnership for the Development of Master’s Study Program LAW AND GENDER, LAWGEM.” It deals with the contemporary gender competent legal questions which are aimed to allow for a better understanding and establishing a gender equality approach to different fields of law. In that respect, the editors of the book series underline that a gender-competent approach is required when considering the highest values and normative standards of modern international, European, and national law. The authors in the series volumes try to establish a gender equality approach to different fields of law while taking into consideration specific issues of their interest and attempting to consider chosen different aspects of legal knowledge and practice in a paradigmatic gender-competent manner. They attempt to critically reconsider the dominant molds of legal knowledge and present innovative gender-sensitive and gender-competent insights relating to different issues within all fields of law, in order to introduce new research topics relevant for gender equality in law, as well as to stimulate the development of a legal and institutional framework for achieving gender equality in real life. The book series Gender Perspectives in Law encouraged scholars and experts from different fields of law and humanities-social sciences to reconstruct their legal and multidisciplinary knowledge from the standpoint of gender equality.

The first book published within the series – Dragica Vujadinović, Antonio Alvarez de Cuvillo, Susanne Strand (eds.) Feminist Approaches to Law – Theoretical and Historical Insights, offers the background theoretical and historical analysis for the book series Gender Perspectives in Law. The book contains papers witnessing different impacts of feminist political and legal theories, as well as critical legal studies. The ongoing issue of defining gender, for example, is a recurring theme in the texts. There are papers that question the binary basis of the gender issue and the notion of gender as such. Others start from the binary dichotomy and attempt to expand the consideration toward a multi-dimensional understanding of gender identities. The main focus is feminist reconsideration of all relevant fields of legal knowledge. The primary aim is to demystify the seemingly neutral character of legal norms and legal knowledge and highlight the power relations at different layers, beginning with male and female legal subjects of Western heredity (in terms of culture, ethnicity, and race), then moving on to different needs and power relations among female persons of different races and classes, and finally moving on to differentiating gender relations and identities beyond the framework of the women–men binary dichotomous codification, i.e. also taking into consideration the multiple options of intersex, transgender, queering, etc.

The papers deal with very different topics related to feminist political theories, the feminist movement, critical race theory, critical legal history, queer theories, adultery, as well as issues related to constitutional democracy and theories of democracy in general. The converging aim and axis is gender equality-its clarification, articulation, promotion in legal theory and practice. Interesting and indicative enough is the fact that there are authors from many countries spanning across different continents. The global relevance of the gender equality perspective in legal education, legislation, and legal professions has been expressed and confirmed in the content and authorship of this book.

The Center for Democracy Foundation is an associate media partner of the Faculty of Law, University of Belgrade on the project: New Quality in Education for Gender Equality – Strategic Partnership for the Development of Master`s Study Programme LAW AND GENDER, or the LAWGEM project.

For more information about the project click here: http://lawgem.ius.bg.ac.rs